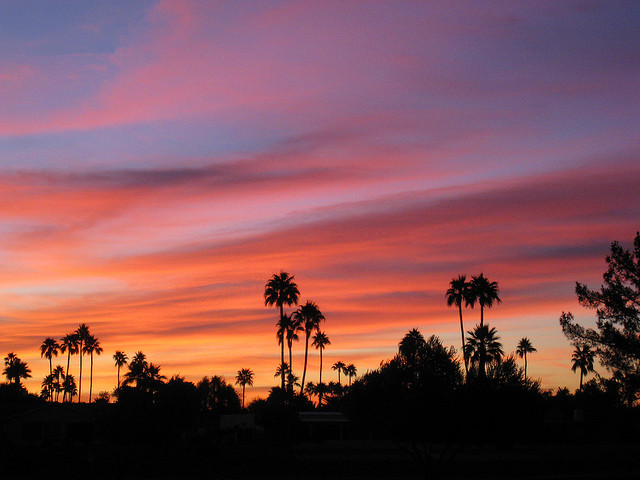 Do you need airport transportation from Scottsdale, AZ to PHX also known as the Phoenix Sky Harbor Airport? Then call Mesa Limo PHX and we will get you there in a snap.

Why bother with a taxi that will be small and cramped or old and used and not really a very good deal anyway?

Why take your own car and pay the highway robbery parking fees at the airport? Not only that but if you take your car you will have to transport your luggage from your car to the airport. The reality is that you may have to do that in the extreme Arizona heat in the middle of the summer.

Mesa limo will make this experience a pleasure and joy because we will do the heavy lifting of the luggage.

We will use one of our first in class vehicles to transport you in creature comfort and superior climate control right to the entry door of the airport.

While you are traveling you will have all the communication connections you need to do whatever it is you must get done. From Wi-Fi to GPS, from flat screens to mp3 s we have all your needs met.

Our first class professional and trained chauffeurs and drivers will attend to all your needs and provide you sophisticated and elegant service.

Executive travelers will benefit greatly from our executive transportation service because they will have time and the right atmosphere and connectivity to accomplish the many tasks required of them.

Our professional office staff will work with your organization to arrange and provide the type of ground transportation you require for your staff.

Some interesting facts and history about Scottsdale Arizona.

It’s no secret that water is desperately needed in the desert. So in 1883 the Arizona canal was dug and built and passed through Scottsdale. With water in the area the land is much more valuable. So the namesake of Scottsdale, a Chaplain Winfield Scott visited the area in 1888 in the middle of the winter. For the amazing price of $0.50 an acre he bought land which would have extended from the east side of Scottsdale Road and Indian School Road what is now Hayden Road and then northward to Chaparral Road and west to Scottsdale Road.

So after buying this land for $0.50 an acre he makes the shrewd businessman move and leases it back to the government. The total cost for the land amounted to $3.50 per acre.

An amazing fact is some olive trees that chaplain Scott planted still exist along Civic Center Boulevard and 2nd street in Scottsdale.

In the summer of 1896 there are plenty of students in the area and Winfield Scott approaches the school board supervisor of Maricopa County to form a new school district. This new district is numbered as 48 and is named Scotts – Dale. The first one room school house is built near what is now the Scottsdale Historical Museum. This school was just east of this current structure.

By the year 1909 there are too many students for this original school house. For the whopping sum of $4,000.00 a brick building that now houses the Scottsdale Historical Museum is built.

As in most areas World War 1 brought tremendous change. Cotton was one of the main crops grown in the area on the irrigated desert land. At that time cotton was used in the manufacture of tires. Many of the cotton workers are Mexican immigrants. One of these families who settled in Scottsdale by the name of Corral would actually sell tamales to make ends meet during the 1930s.  The wonderful restaurant called Los Olivos Patio at Wells Fargo and 2nd street is owned by this very family. That’s some amazing longevity.

The very first newspaper in Scottsdale was called the Scottsdale Bulletin and this occurred in 1922.

The famous tourist architect Frank Lloyd Wright created an outdoor camp near the McDowell Mountain and this incurred in 1937 just before World War 2. This was to become known as Taliesin West later on.

It wasn’t until 1962 that Scottsdale changed from a town in to a city by means of a charter. With some forward thinking residents the City Council prohibited new billboards. In 1965 anew  law was made that would regulate signs as to their size and placement. Thus you don’t see a lot of huge billboards in the Scottsdale area.

The first large park built in Scottsdale occurred in 1967 and was named the El Dorado park. This would later turn into the Indian Bend Wash Greenbelt. By 1970 the Scottsdale Community College opens its doors located east of Scottsdale on the Salt River Indian Community. And in 1974 music comes to the city of Scottsdale in the form of the Scottsdale Symphony. By 1975 after the East Shea Area is annexed near Fountain Hills the population of Scottsdale grows to approximately 78000. Then in 1980 Molly the Trolley system is in place and visitors can be transported from shopping areas and hotels throughout the area.

By 1981 the development near Gainey Ranch in Scottsdale Ranch has begun. By 1990 the population of Scottsdale has grown to 130000 in nearly the same time the Scottsdale Chamber of Commerce relocates to a larger facility in the Scottsdale Mall.

In 1994 the forward-thinking citizens of Scottsdale vote to create the McDowell Sonoran Desert Preserve and amazingly set aside almost one-third of the city surface area to be untouched and natural desert preserve.

By the year 2000 the population has grown to over 200,000 and the loop 101 Pima freeway is servicing the Scottsdale area.